(Waaqeffannaa, 28 Feb 2016) “Gadaa System in general is very complex and one can’t fully learn and finish it,” Jemjem Udessa a senior researcher 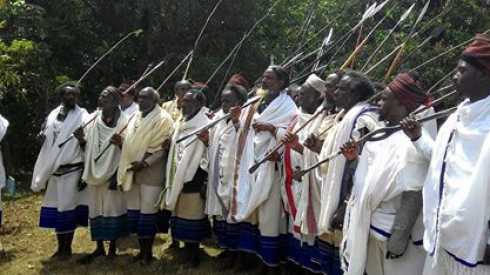 Gadaa is a highly independent democratic and egalitarian political system that has guided the religious, social, political and economic affairs of the Oromo people of the Horn of Africa for many centuries. Sources indicate it is a system that organizes the Oromo society into groups or sets (about 7-11 ) that assume different responsibilities in the society every eight years.

Under Gadaa System the power of administering the affairs of the nation and the power of enacting laws belong to the people. Every male member of the society who has come of age and of Gadaa grade has full rights to elect and to be elected. All have the right to air their views in any public gathering without any fear.

Last week was a very unique one, for Guji Oromo’s had inaugurated their new leader (Aba Gadaa). The new leader will serve an eight-year term in a system that rotates power between the tribe’s top clans.

Me’ee Bokkoo located in Guji Zone of Sora Woreda is among the most sacred places in which the Gadaa ritual traditions and ceremonies are conducted. The place is special for various reasons including its being a sacred place where law is drafted, ratified, amended and officially indoctrinated.

Power transfer in Gadaa System is not like a power transfer in Monarchy. People raise fund to campaign for their sons based on their family legacy. In such campaign, the individual capacity of the son is also seriously scrutinized.

This time Elena party handed over its authority to Harmufa party. It is for 15th term the Harmufa party received power. Such power transfer is conducted in a volitional manner, with full passion and without friction. There are five irreversible power taking cycles. The five parties take power in irreversible cycle. One party takes the power and exercises the authority for eight years and hands it over to another party after the completion of its eight year term. The Gadaa cycle doesn’t go back or power does not stay in the hands of a certain party. It has to be passed over to the other party every eight years and the cycle is not reversible.

There is preparation ahead of power transition both at power giving and receiving places. The power taking Aba Gadaa arrives early in the morning riding their horses with a delegation of eight members, this time from Harmufa party. Each person represents his own clan. There are seven clans in Guji that accompany Aba Gadaa. Each clan will represent a person who accompanies Aba Gadaa. The eight people coming to the Aba Gadaa on power and candidate Aba Gadaa greets the former Aba Gada. And then he asks him whether the authority belongs to his party or the party of the other one. He replies “Yes!” saying the authority is now yours but the role of advisory will be mine. The rhythmic exchange of expressions and the ceremonial procedure during this time defies description.

According to sources, Gadaa system is not one where authority is simply passed from fathers to sons. Of course, the legacy of one’s family and the past accomplishments of a clan councillor has a great influence in the decision that is made to nominate the would- be Aba Gadaa and councillors. Would-be Aba Gadaa and councillors must pass through a rigorous training for years about the laws and the customs and the wisdom of leading a society before they take the position of authority in Gadaa.

According to Guji tradition, celebration begins with different activities a week before the actual day of power transfer. Elders at different hierarchical position of the system gather and put on beautiful costumes to perform dances and musics. The youths also showcase their unique style of dancing. During the week, communal issues like conservation of the environment, protection of wildlife, amendment of old laws, adoption of new laws and the like will be discussed. And decisions will be passed accordingly.

For instance, there was a debate being heard by the Gumii. Gumii is the legislative branch of the Gadaa System. The debate was about the huge dowry the groom has to hand over to the bride’s family. Accordingly, the Gumii passed a new law that renders the fair amount to be offered to the bride’s family. Aba Gada Bagaja Ganale said that the offer has become an issue of concern as it has been creating trouble among the youth. “The youth of this generation cannot afford to provide an exorbitant dowry. And as such they demanded change and that is why we are obliged to amend the law,” he added.

Gadaa System in general is a very complex one and one can not completely learn and finish it. Everyday one observes some kind of practices, which one can’t comprehend, with some kind of message, target and communication, so said Jemjem Udessa a senior researcher who has published several books on Oromo Gadaa system in an exclusive interview with The Ethiopian Herald.

Aba Gadaa is not only by himself. There is a period of graduation for Aba Gadaa. Specially in the first four years he can not move alone. He can’t go alone or go out of his geographic area as this period is a time for drawing lessons. He has a team to move with and it is after four years that he becomes a full- fledged Aba Geda and fully graduates for governance, he added .

On the ceremony held last week, after blessing the crowd, the new Aba Geda Jilo Mano expressed strong commitment to serve the community during his tenure. “I will not erode my culture. I will never barter my culture by monetary rewards. I am committed to stick to my father’s tradition,” he added.

Speaking on the occasion, Oromia State President Muktar Kedir said that the state government is highly committed to preserving and protecting precious cultural systems across the state. We are very committed to strengthening the Gadaa system which is the pride of the whole nation, he added.

Guji Zone Administrator Tarekegn Gololchha on his part said that Guji Zone has a great tourism potential in which the Gadaa System power handover ceremony is the prominent one. The zone is aggressively working to attract more tourists in the years ahead. In the effort to register Gadaa System in UNESCO, the zone is playing a leading role through maintaining the Gadaa System intact, he added.

Adola Woreda Culture and Tourism Bereau Deputy Head Mohamed Hesa on his part said that Guji Zone is well known for its immense and beautiful cultural heritages. The zone is working primarily to uphold the Gadaa culture not only for the Oromo’s but for the whole of Ethiopia and efforts are under way to get the Gadaa System registered in UNESCO, he said.