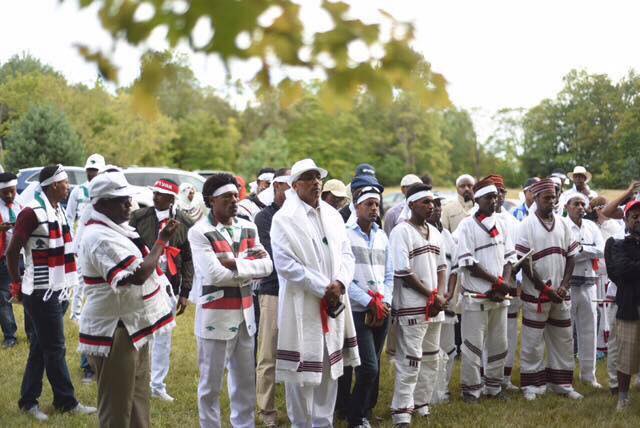 According to the organisers Toronto is the earliest celebrator of Irrecha overseas because of the North American weather.

As fall is approaching to take a turn from summer and the weather is expected to become tougher, early September is annually a moment of Irrecha celebration in Toronto.

Participants of Toronto festival gather from major cities in Ontario province-Toronto, Ottawa, Hamilton, and Kitchener-Waterloo. Organizers of the even are mainly from Greater Toronto Area (GTA).

Irrecha is not a one day event in Toronto. It is an event of 24 hours or more. The Toronto Irrecha is a showcase of multiple ceremonies. Due to in conveniences to conduct various events on different days, celebrations that take place back home separately are displayed on the Irrecha day as follows altogether.

The ceremony honoured the Oromo elders’ blessings and wisdom, and eventually helped to preserve the heritage and strengthen the progress of humanity. It is also committed to the beginning a back to the root project for us as a society.

At this point in time Irrecha is a transreligion subject for the Oromo people. The revival of Oromumma spirit is grounded in it, the renaissance of Oromo self-consciousness is in the making through it.

Irrecha is one of the Gada elements and should be treasured as part and parcel of the unsung democracy. Irreecha is a manifestation of an ancient African consciousness about the universe, back in millenniums.